The Secrets of the Dark by Arka Chakrabarti -A Book Review 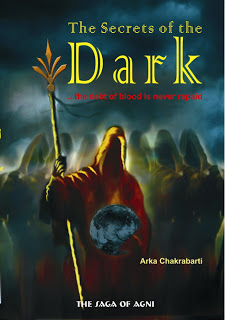 Fantasy series have always enamoured people. The good ones attain cult status, earning huge fan followings and become a part of popular culture. Come to think of it. Hasn’t everyone once shouted Crucio at the professor who gave them too much homework? Or haven’t you walked into a stranger’s wardrobe looking for the secret entrance to Narnia?(Well okay, not everyone’s as weird as me but you do get the point I’m trying to make)But the lesson we learn from all of this is that  if a fantasy series is bad, it gets buried among the tons of books out there. So, it becomes important for the first novel of a new fantasy series to be hard-hitting in its impact. The Secrets of the Dark just manages to pass the muster but just barely

This 352 paged novel is Arka’s first novel and is a part of a series named “The Saga of Agni”. Set in the mystical land of Gaya, the series is aptly named after the protagonist Agni. The plot is simplistic at its core, with the usual sprinkling of revenge, vengeance and betrayal. I won’t dwell over the details of the plot, but in a gist, it’s the tale of Agni following the trail of a criminal who murdered his betrothed. The journey leads him to discover a whole new truth that was hidden away from him.

The nucleus of this book is its Indian-ised style of narration. As a globalising Indian, I generally don’t have trouble adapting to the nature of characters penned in different environments. But many people do not like this need to adopt. This book doesn't lead to such issues. Arka skilfully narrates a tale without any glitches which brings me to the next positive note of the book, no loopholes. Often suspense or thrillers leave loopholes which in their glaringly small size ruin the entire book. Fortunately, The Secrets of the Dark is thoroughly edited and survives the loophole test.

Moving on to the book’s Achilles’ heel, we arrive at something which is debatable  Although the book slowly lays out the detailed plot and the mystery breaks free perfectly with logical arguments, the book does fall at certain points. For starters, the book gets dull with its plot at key junctures which although may not be a huge problem for a book reader, it sure is a slight disappointment. Everything ranging from the playful humour, fighting scenes, suspense revealing chapters, all of them sound wooden and clunky, as if the characters are mechanised robots spouting the dialogues. As I mentioned in my previous reviews, unrealistic characters or unreal character traits are something which I absolutely disapprove of.

IN 3 LINES
Overall, this book is a good read with a slightly over-flowery pattern dealing with an interesting topic and daring to take on a broad horizon. A definite recommendation to readers who long for a mix of an Indian touch to their fantasy genre punch
Like:  No loopholes, Indian-ised fantasy book