Karma: Does It Work?

Karma is one of the paradoxes of our society. Although being a flawed concept that is thrust down our throats on religious basis, it is a superb concept which magically works to ensure the balance of humanity. Tracing its origins takes us back to nearly 3000 years back in history( Take a moment to savour this; It’s easy to say 3000 years ago something but something totally all together different to appreciate the actual significance). The Aryans were comfortably settled in the northern plains of India and it was then, when the concept of Karma was born. Who knew a simple idea would mould into a way of life for millions? Actually, I believe it just works on the seeding of fear.
The small but deep fear within us which is embedded into our conscience enables us to direct our lives on the simple basis of "do good, feel good, and reap good". How many of us live out our entire lifetime thinking, "a good deed now will be a blessing for the future"? Even though it appears as a religious brain washing system (to which all atheists and agnostics will agree), a simplistic explanation and a much more viable one too is to accept the concept as an idea propagated for the betterment of the society.  Think about this: The Aryans conducted a rudimentary form of what we today call "A Social Experiment". If I correctly remember, The Immortals of Meluha by  Amish Tripathi expounds a similar concept. "If everyone righteously carries out their own duties selflessly, automatically law and order will be maintained in the nation state". Seeing the effects today, we can accurately say that their notion was successful. With people tattooing the word itself onto their bare skin or drinking the mantra with their morning tea, the delightfully acceptable concept has taken the globe with a rage and is definitely become important in today's War infested world where a brother hunts a brother, father kills his family and nothing humane remains (I know it sounds clichéd but kya karen it's an accurate description). Some religious authorities might claim that "Karma is a Hindu concept" or "It was expounded by Buddha, he is not our God". May I ask all of them; didn’t Jesus preach that performing good deeds reaps good fruits? Didn't the great Muhammad ibn Abdullah say the same? (One of the fundamental pillars of Islam, Zakāt or donation of alms to the poor is a thinly veiled reincarnation of the same). At the end of the day, whatever you do, whatever you may be or whatever is your religious status on your Facebook, We all have been truly thought about Karma and have been trained into observing it in our lives.
At the cost of being called selfish, I say that Karma brings to our society what we call "peace and harmony". Thus I end by modifying a popular pop culture track, "Because Karma is a bitch" to "We are humane, because Karma is a bitch!"
Here are some images which will definitely help! 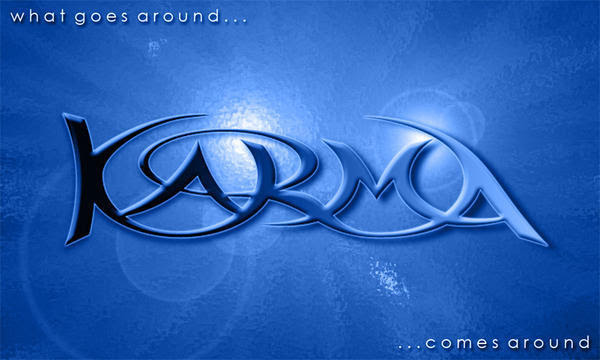 Thank You For Your Feedback.